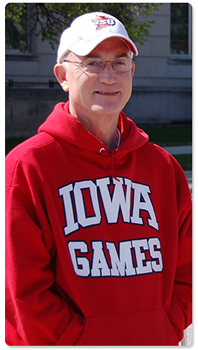 The mission of the Iowa Games is to provide Iowa citizens with a wholesome avenue for positive personal development through sports and physical activity, to recognize their dedication and achievement, to enable all citizens the opportunity to utilize quality sport facilities and to create an amateur sports network of administrators, officials and volunteers throughout Iowa to further the development of amateur athletic programs. In addition, the Iowa Games encourages all Iowans to practice sportsmanship, trustworthiness, respect, responsibility, fairness, caring and citizenship, while striving to be a champion on and off the field of play.

In 2015, the award was renamed to the Jim Hallihan Sportsmanship Award, in honor of the former Iowa Sports Foundation Executive Director.  Some may remember Hallihan as the assistant coach for Iowa State coaching legend, Johnny Orr, who passed away in 2013. Hallihan joined the Iowa Sports Foundation in 1994, when the foundation was comprised of the Summer and Winter Iowa Games. During his tenure, the foundation grew from 2 events and 16,000 athletes to over 20 events, programs and challenges and 190,000 participants.

Hallihan always displayed great character and preached good sportsmanship to all athletes. He served on the Character Counts! in Iowa board and in 2000 was awarded the American Character-Builder award, for creating and implementing an outstanding character development program. In 2009, Hallihan received the Ray Legacy Pillar of Character which is based off good character and providing leadership and inspiration.

To add to his award list, Hallihan received the National Congress of State Games Executive Director of the year award in 2006 and was a recipient of the Iowa Girls High School Athletic Union Sportsmanship Award.

On November 20, 2020 we lost Hallihan at the age of 75. It is an honor for the Iowa Games and Iowa Sports Foundation to carry on his character and leadership with the Jim Hallihan Sportsmanship Award.