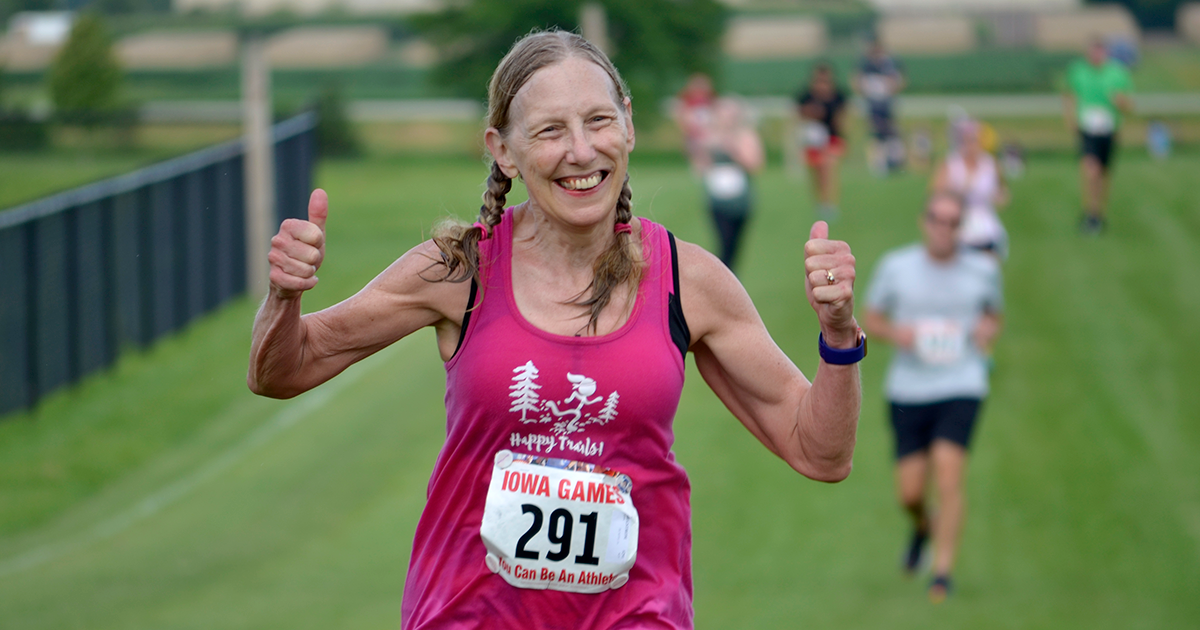 Competition is often viewed as linear, A-to-B, wins and losses, etc. The process is overlooked for “what have you done lately?” Do sports still have a space to grow and tell your story? Ann Hegstrom, De Sota, Iowa, certainly believes so. As the 2022 State Games of America presented by Grinnell Mutual draws near, Ann was kind enough to talk about her time competing in different events and share why she competes.

Ann competed in track and field in high school but chose not to pursue anything in college. Over the years, Ann ran in marathons and half marathons but did not compete on the oval. One day, while in a local Casey’s General Store, Ann noticed a flier for the Iowa Games and decided to check it out.

Competing did not come without hesitations. Ann was originally cautious about participating in the Iowa Games because she did not want to make a fool of herself. However, after the competition started, Ann realized that people were not there to judge. “The cool part of the Iowa Games is that everyone competes and everyone cheers and it’s so positive. That’s what makes me come back,” Ann said. Ann works with blind students as part of the Iowa Braille School. Ann explained that her experience in these competitions helps her empathize with some of the blind children she teaches. Sometimes Ann’s students are often hesitant or scared to try new things. As a result, Ann wants to use sports and activity to get her out of her comfort zone. She said that helps her understand her students more and hopefully through Ann’s experiences, she can come alongside them to inspire and encourage.

While competing in the Iowa Games, Ann heard from others to check out the Iowa Senior Games and has now competed in that event for four years. Additionally, Ann competes in some USATF events and the State Games of America. She does race walking, the races 400 meters and down, “dabbles” in field events, and wants to learn javelin. Ann said that the 200-meter dash is the most fun because runners have to go fast while also using some strategy. She also said that the 400-meter dash is her best event, giving credit to her experience running that in high school. Additionally, Ann loves the race-walking event.

Through various setbacks and challenges, Ann has persevered. Trying to stay active during the Covid-19 pandemic proved to be difficult. Motivation was hard to find as events kept getting canceled or postponed. Ann also suffered a stress fracture in her leg. In those times, it would be easy to give up. However, Ann was determined to stay active. Winning events was not ever her main goal, but rather to improve every time and have fun while doing it. She tried to run with her dogs, but according to Ann, they hate running. Instead, she bought a treadmill and used that to stay active during and after the pandemic. Even with a stress fracture, Ann ran in a half marathon on crutches!

Reflecting on her time competing, Ann said her inspiration was her late husband, Gary. Through all Gary fought through in his life, he was so proud of Ann and loved watching her compete. At that point Ann said, “how could you not do your best?” When Ann received the Iowa Games Female Athlete of the Year award in 2016, it brought her tears knowing that Gary would have been so proud of her. She dedicated that award to him and he still stays in her mind as her inspiration while competing and training.

Ann also mentioned the feeling of accomplishment after finishing an event. Knowing that she worked hard and is staying active motivates her to continue competing whether that is in a marathon, the Iowa Games, the State Games of America, or whatever else she puts her mind to. At one event in Albuquerque, New Mexico, Ann noticed a 103-year-old woman running in the 100-meter dash. Seeing her inspired Ann knowing that she still may have over 30 years ahead of her for running and competing.

Moving forward, Ann wants to inspire the younger generation. “You never know who is watching you,” she told me. Ann told a story of a little girl she saw every year at the Iowa Games. One time at a USA Track and Field event, the girl came up to Ann and told her, “I want to be just like you when I grow up.” Ann wants to meet more people every year at different events and hopefully inspire them to compete for years and years. Even when competitors get older, Ann hopes to show that they can still have fun simply getting out and competing.

What is Ann’s message to others thinking about competing in the Iowa Games, Iowa Senior Games, State Games of America, and more? “Just come!” Ann gave a lot of credit to her coaches, trainers, and even other athletes who helped her learn along the way. She reiterated the camaraderie of the events and the positive atmosphere that builds up learning, fun, and enjoying the process. Ann promises that the experience will be fun and well worth your time!